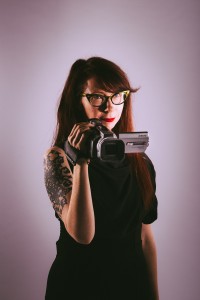 Alexandra Heller-Nicholas has been a regular visitor to the AFI Research Collection in the past couple of months, primarily working on her project Hidden in Plain Sight: Australian Women’s Film Criticism, 1980 – 1999. This project (for which Alexandra received the 2017 AFI Research Collection Fellowship Award) examines the intersection between women’s film criticism and women’s filmmaking practices in Australia during the 1980s and 1990s. The fruits of Alexandra’s labour on her project are starting to be shown as she’s published several articles that can be viewed online for free. These articles either relate directly to her Fellowship project or are based upon the research and information she found whilst here at the AFI Research Collection.

– “Girls on Film: Growing Up with Cinema Papers” at Senses of Cinema sensesofcinema.com/2017/pioneering-australian-women/cinema-papers-magazine/ –

– Susan Lambert’s On Guard essay at Senses of Cinema: http://sensesofcinema.com/2017/pioneering-australian-women/on-guard-1984/