In 2005, the AFI Research Collection received a generous donation of resources from the iconic Australian television production company Crawford Productions, when their Box Hill Studios were demolished. This donation spans a range of materials relating to productions from early radio plays through to television icons such as Homicide and The Flying Doctors. Materials include stills, scripts, ephemera, promotional items and background research.

We would like to share a sample of some of the wonderful resources we have in our Crawford Collection. The collection covers a range of genres such as period dramas, medical dramas, comedies, and children’s shows. In this article we would like to highlight the always popular Crime genre where we have resources spanning over 40 years of radio/television programs produced by Crawford Productions.

Between 1945 and 1956, Crawford Productions was a major producer of Radio plays for both local and international markets. We are very fortunate to have a number of these radio scripts 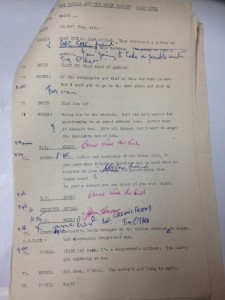 The Crime Club (pictured above) was a series of radio plays in the early 1950s based on true stories. Research for the plays was done both locally and internationally with the help of Victoria Police, the French Sûreté and English crime novelist, John Creasey.

The television series Homicide (1964 – 1976) holds a special place in Australian television history as the first successful Australian drama series. It regularly achieved ratings in the high 40s. Many people who worked on Homicide have gone on to have very successful careers in Australia’s film and television industries.  Our collection holds a selection of scripts from Homicide. The scripts and character descriptions provide a fascinating insight into the social and cultural mores of Australia in the 1960s /early 70s. 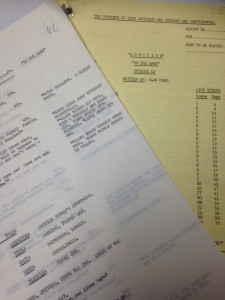 Division 4 scripts. Note the changes in title, showing the development work Crawford Productions put in before deciding on a final name for a show

Initially, Division 4 was to be called Saints and Sinners and it was to be set in the Melbourne suburb of St Kilda. However, due to objections by the St Kilda Council who were concerned with the image of the suburb, it was decided to use a fictional suburb of Yarra Central for the setting and the working title of the show was changed to Police File (Storey 2013).  Division 4 scripts and other related pieces are held at the AFI Research Collection.

We hold a large number of  photos and slides produced by Crawford Productions for to promote their programmes. Below are photos taken from the television series Matlock Police (1971 – 1976).

In the first half of the 1970s Crawford Productions had a successful police drama on each of the commercial stations. Homicide on Channel 7, Division 4 on Nine Network and Matlock Police on 0-Ten Network. 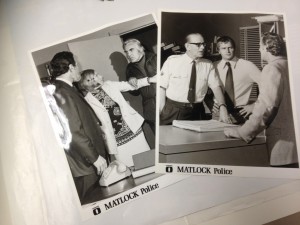 Some promotional photos for the show Matlock Police. These were often sent to the media in the hope that they would be published in newspapers and magazines

Our Crawfords Collection features a wide range of graphic items such as some of the props shown below that were used in the series Cop Shop (1977 – 1984). 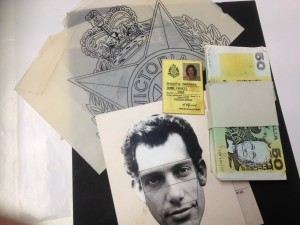 Researching Crime and the Police

The research undertaken by Crawford Productions for their Police/Crime dramas was vitally important for the production of the shows.  Researchers would compile information on (in)famous crimes, which provided invaluable source material for the screenwriters to produce new scripts for the shows. The research was meticulously compiled and filed to enable the scriptwriters to access detailed background information on various crimes such as abductions, assaults, robbery, murders, etc. Their files included character insights and technical information research. We have an extensive collection of files that have been developed by Crawford Productions to support their Crime dramas over the last 40 years. 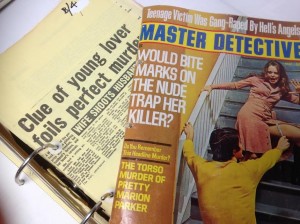 Crawford Productions maintained a tradition of having a close relationship with the Police Force. An example of this relationship was shown in their telemovie and on-going series The Feds (1994 – 1996), which was made with the cooperation of the Australian Federal Police. We have a large collection of background research conducted by Crawfords for this programme. 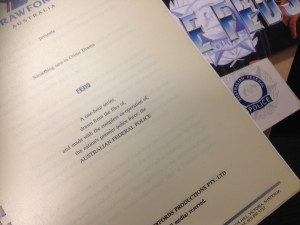