Long gone are the days of black & white, silent cinema, perhaps to the lamentation of some of us. It did make a comeback for a short time however, from 1989 to the early 2000s, when Melbourne independent filmmakers Brice Fenwick and Anthony Whiting (and shortly after Lorraine Dore) organised a film festival to celebrate the 100 year anniversary of George Eastman’s invention of film stock. They called it the White Gloves Film Festival, a reference to the traditional white editing gloves of yesteryear, which were also required to make a cameo in the 1989 film entries. After its inaugural year, the festival proved so popular that it eventually grew into a national event with screenings eventually held in Sydney and Brisbane.

Those who entered the festival had to produce films on Super 8mm or 16mm film stock, in black & white, edited in camera, no soundtrack, and run for no longer than 3 minutes in duration. The films had to be shot over a weekend specified by the organisers, shooting only within those 48 hours and including a ‘secret symbol’. The symbol was given to filmmakers just prior to the weekend shoot and needed to make its appearance in the first 30 seconds of the film. The purpose was to reproduce the shooting conditions of early, pioneering filmmakers. As filmmakers had to drop off their unprocessed films to the White Gloves offices, this also meant that the festival screenings were the first time they would see their work. According to the 1993 ‘Background Notes’ from a press kit, “Audience participation, whether critical commentary or improvised sound effects, is thoroughly encouraged during the screening’. 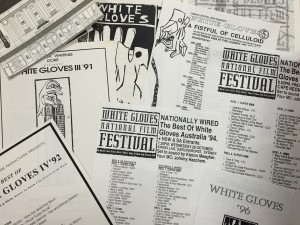 In the AFI Collection sits a box of White Gloves ephemera donated by Fenwick in 2014. Within its contents are publicity materials, such as photocopies of posters and tickets, programs, newspaper clippings and press kits, handwritten account books, budgets, entrant surveys and submission forms, and invoices. A few familiar names stand out from the programs that have gone on to further film and television success; for example, director Matthew Saville (Noise, 2007; ‘The Slap’, 2011) participated with a few entries throughout the years. Hollsdotter Industries: Guide to Adages and Aphorisms from the 1998 festival is one of his more memorable titles come across in the collection.

What is truly interesting about this box of goodies, though, are the numerous letters and printed email correspondence between the filmmakers and organisers. It’s clear from these letters that those who participated loved the festival. Most of the letters are filmmaker requests for their films to be returned, written on anything from notepad paper to postcards (Marilyn Monroe and domestic goddess Shirley Purvis make an appearance), to the backs of Commonwealth Bank withdrawal forms. However, some of the requests appear as a pretence for further dialogue, often with a tone of familiarity that suggests the filmmakers and organisers are all members of one, big celluloid family. One letter, written on the back of half an unidentified publicity shot, states, “When-oh-when are youse [sic] guys going to make the grousest film spectacular of all when you put on the ‘White Gloves Best of All Time Retrospective’…” Another one apologises for some “poor artistic skills” evident in some flowers that were hand drawn for a title sequence that the filmmaker’s brother apparently confused for some parts of the female body.

Although officially finishing up in the early 2000s, White Gloves organisers held one more event in 2014 entitled White Gloves Rebooted. There was a key difference for the reboot, however, with filmmakers allowed to shoot on digital cameras and editing their films over the 48 hours. This event celebrated the 25th anniversary since the festival’s beginnings, screening a selection of the festival favourites and new works, and, as it always did, celebrating the craft of filmmaking itself.